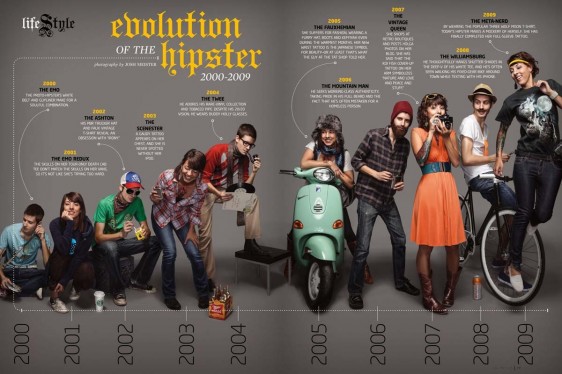 Stereotyping is never good. And this is a bit dated, but it's still pretty accurate.

Yesterday, talk of hipsters arose randomly in the editorial aerie (I think we ended the conversation talking about Bob Dylan—known as Robert Zimmerman in his pre-hipster days). The convo reminded me about an instance a month ago, when I was Tweeting with a friend of Knock Knock (I handle all social media outreach at the KK office, so in case you thought I was on Twitter while on duty, I was actually working—promise!), and the person called us “hilarious hipsters” from the East Coast. Now, it wasn’t out of bad taste, as so many expect the situation to be when the h-word is involved (the tweetee is a sweet, sweet fan). Still, I was bothered by it for some reason (and not just because our bums actually sit on the West Coast as opposed to the east).

It’s probably because by society’s standards (in league with my imagination), a person deemed a “hipster” thrives on pretention, throws back a few cold Pabst Blue Ribbons as he/she strokes their unruly beard or mustache (whether self-grown or store bought), while flipping their limbs this way and that to Animal Collective beats at the latest Pitchfork-sponsored music festival. Don’t get me wrong, that’s all fine and dandy (to each their own), but there are so many Internet memes and videos bashing hipsters nowadays, it’s hard associate the word with anything above loathing. And according to a Psychology Today article (sent to me from Jen, our head honcho), “nobody likes hipsters, not even hipsters.”

In short, our team, as individuals and as a whole, aren’t hipsters (although there are plenty of Angelenos hipsters scattered throughout Venice). If you stepped in our office, or scanned any of our In It for the Money posts, you would see that we don’t quite match the description (it’s funny that people may think that though).

But maybe our products exude some sort of hipster nature that’s under my radar? (I could see a skinny-jeaned, scarf-wearing dude reading our Convert’s Bible or handing out Rate That Beer sheets.) What do you think? Does the Knock Knock brand seem at all hipster to you?