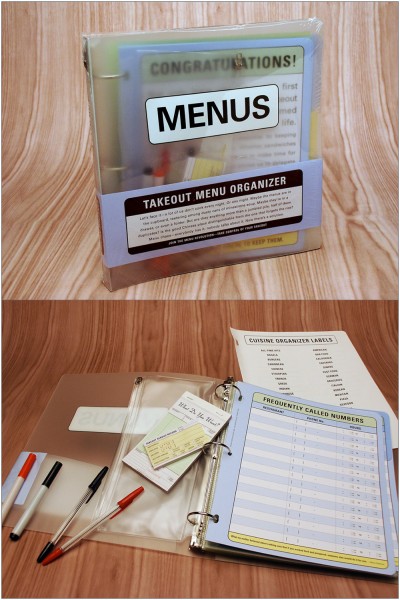 The original Menu Organizer was contained a translucent polypropylene binder. For a bit of wit, “Menus” was printed in mirror writing on the back of the binder. This version included more items than a company could possibly be profitable with: a pencil pouch, ratings sticky notes, a truly crappy pen or four (including two dry-erase so you could mark orders on the plastic sleeves holding the menus), and a life-sized (small) order-taking pad. And . . . the essay!

It’s our “Something for Nothing” feature, in which we give you something we wrote or otherwise made (other than the blog post itself, of course)—for free!

Back in the day, before Knock Knock was jaded (or sensible, depending on how you look at it), we put tons o’ editorial content in everything. Even in products for which you wouldn’t necessarily expect it. As a lapsed academic, I believed in research and footnotes (and still do, to a certain extent, though when time gets away from you and something isn’t perceived as “value-added,” one tends to stop doing it quite so much; remind me to tell you about the time I spent 18.7 hours researching and writing one greeting card).

I have long been fascinated with the evolution toward outsourcing our food preparation, akin to outsourcing the sewing of our clothing and the building of our homes—things we just don’t do ourselves anymore. So what better “Easter egg” to include in the first Menu Organizer than a history of takeout? I figured that those who would appreciate it would really appreciate it while others would simply ignore it. Remember—this baby was published in 2004, so it was before the Whole Foods superstore revolution. It’s amazing that in just seven years, so much has happened in this arena!

We actually gave permission to the Cornell University School of Hotel (and Hospitality) Administration to reproduce it in one of their journals, though we never saw the finished product, so perhaps it didn’t go forward. We were so honored that a university recognized how meticulous our research was! The ultimate realization of this concept was The Takeout Cookbook, which completely tanked, in part because it’s not really a cookbook, but a history of outsourcing our food. The content in that is great, though, so maybe one day we’ll figure out how to use it in something else, like cooking with leftovers!

The Definitive History of Takeout
First Published in the Original Menu Organizer, Spring 2004

Let’s face it—we don’t cook so much anymore. “Our society is transitioning to a point where preparing food in this country will have the same status as building our own furniture or sewing our own clothes,” says Scott Allmendinger, publisher of Takeout Business. “It won’t be too many more generations before that happens. People are already beginning to look at preparing food as an avocation or a hobby, like woodworking.”1

Public dining is itself relatively recent in human history. The first known restaurant, opened in Paris in 1765, served soups and broths. While earlier establishments (mostly inns and hostelries) charged a fixed price for one meal, consisting of whatever the host cooked that day, the soup outfit displayed a varied menu from which the customer chose. In French, the word “restaurant” means “restorative,” and this pioneering soup vendor believed his fare to have salubrious properties. Irrespective of health benefits, the word on the soup sign stuck. The first full-service, luxury restaurant opened in Paris in 1782, and by 1804 Paris boasted some 500 restaurants, owing in part to the French Revolution, which, by displacing the aristocracy, put many private chefs out of a job.

The first restaurant in the United States, Delmonico’s, opened in 1830 in New York City. Subsequent American contributions to the dining genre primarily entailed the incorporation of speed and mobility. The United States is responsible for the first cafeterias (which arose during the Gold Rush to feed miners); restaurant chains (the first, Harvey House, opened in 1876, and operated in train stations across the country to feed passengers during stops); the railroad dining car; the lunch counter; fast food (White Castle opened its doors in 1921, 34 years before the establishment of the first McDonalds, in 1955); the specialty restaurant (e.g., seafood or steak); and the drive-in or drive-through. It’s no surprise that the United States has also led the way in food takeout and delivery.

While restaurants have flourished in the U.S. for almost 200 years, early eateries were oriented primarily to the wealthy and to travelers or laborers. Over the last fifty years, however, the practice of eating food prepared outside the home—whether in a restaurant or takeout—has risen dramatically. The restaurant industry’s share of the overall food dollar grew from 25 percent in 1955 to 45.8 percent in 2000,2 a proportion expected to reach 53 percent by 2010.3

Of those dollars, a skyrocketing percentage goes to takeout and delivery orders—home-meal replacements, or HMRs in industry jargon. Dinnertime takeout has doubled since 1984.4 In 1996, takeout overtook on-site dining as the majority of all food-service occasions (54 percent), and continues to rise at three times the pace of on-site meal growth. Diners now choose to eat takeout dinner at home 61 percent more often than they did ten years ago.5 In 1998, 21 percent of all U.S. households used some form of takeout or delivery on a daily basis.6

Experts attribute this shift largely to the busyness, speed, and increasing specialization of contemporary life. In a 2001 survey, one third of respondents said they believe “using restaurants allows them to be more productive individuals” and that takeout meals are “essential to their lifestyles.”7 Industry researcher Hudson Riehle asserts that “Carry-out will only continue to grow in importance to the industry. . . . It seems unlikely that this trend will ever reverse itself.”8 When asked how big the takeout and delivery revolution would become for restaurants, consultant David Pursglove replied, “As big as you can imagine. Takeout/delivery meets every need that is developing—lack of time, need for more quality time with family, hassle over dressing and parking, etc.”9

These statistics show that we’re not alone, and we’re not necessarily lazy or extravagant. We simply don’t have the time or inclination to cook. Given this transformation of our eating practices, does it make sense that we store our precious menus in a chaotic jumble? Order your takeout food with pride and organization—you are part of the Takeout Revolution.