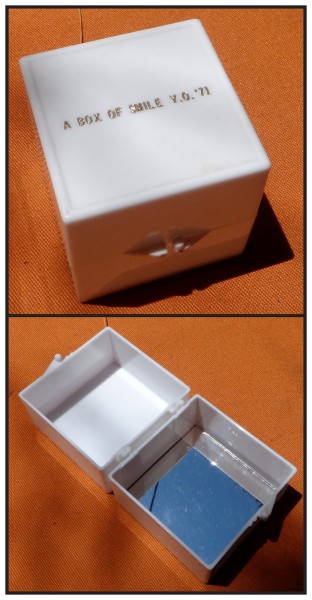 Yoko Ono’s A Box of Smile. So much more than breaking up the Beatles.

We always start out the development of a product with the highest of hopes. After all, we manufacture mostly on spec, meaning we come up with an idea, execute on it, and manufacture and warehouse it all on our own dime. Failures are costly, and they hurt our souls.

I once had a consultant say to me, “If only you could determine which products would sell before you made them, you’d be in great shape.” Can you believe I paid for that advice? Our money would have been better spent on a crystal ball. Knock Knock has surprise hits and surprise failures, and even though we’re going on our tenth year, our success to failure ratio is pretty darn constant.

In Fall 2004, I had an idea for a product I called “Deep Boxes.” The inspiration for the Deep Boxes was in part a Fluxus project by Yoko Ono, A Box of Smile. Fluxus, most active in the 1960s and 1970s, was a loose group of more than thirty artists around the world who sought to create do-it-yourself art with an underlying social message, often from found objects and in multiples. Participants included composer John Cage, site installation artist Christo, and video artist Nam June Paik. One of their major mediums was Fluxus Boxes, also called Fluxkits. I own some of these boxes, inexpensively purchased (for significant art) at one of my favorite purveyors in the world, Printed Matter, a New York City store-gallery of artist-made books and ephemera. Also, generally speaking, I just love boxes, containers of all kinds, the idea that you can store or carry something precious in a meaningful receptacle.

With its surprising mirror on the inside, I loved the interactivity of A Box of Smile and thought we could bring that to a product. One of my goals with early Knock Knock was to blend art and commerce, making quality design affordable and even possibly art. With respect to the blending of art and commerce, I would learn through a few efforts that sometimes people don’t exactly want that blend.

When they were done, the Deep Boxes were, I thought, just beautiful. They fit into a category I called “More than a card, less than a gift.” On the bottom of the Deep Boxes were spots for gift inscription. They had uplifting messages, but not too saccharine, in keeping with the Knock Knock anti-affirmation ethos. My thought was that people could give them empty or with a special trinket inside. And of course we said nothing about their esoteric inspiration.

The upshot? Almost nobody got them (in both senses of the word “got”) or liked them, and they sank like conceptual stones in conceptual lakes. It was a fiasco—we’d manufactured 5,000 of each box, including our one stab at creating prepacked assortment self-displays (meaning the box turns into a display). Not only did they not sell at retail, there was no aftermarket (the discounters who buy liquidated or closeout product to sell at a steep discount, such as Tuesday Morning or TJ Maxx) for them. And everybody thought the brain was untouchably gross.

I still love them, though. What do you think?