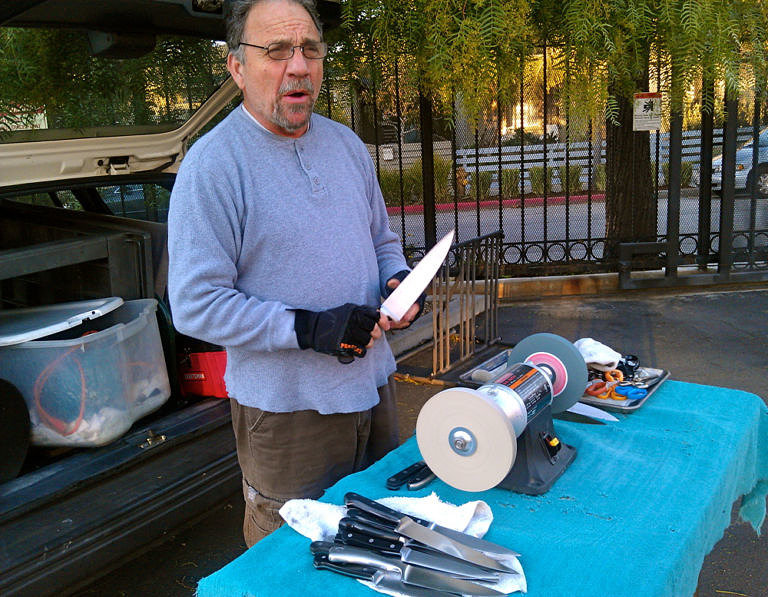 The following is a random story that has no relation to post-holiday events, New Year’s, or the like. But this guy is marked as “rad” in our book.

True story from last Thursday: Jen wanted her knives sharpened (a dull knife means wasted time), so she gathered her and her neighboring friends’ collections, and called upon Gary, a mobile, knife sharpener. Yes, the man sharpens knives for a living. And yes, we all were instantly intrigued.

When he came by Thursday afternoon, right as dusk readied its tiring clouds, I stepped outside of the Knock Knock office to see this “knife sharpener” at work. And as you’d expect, the scene was momentarily puzzling: a man, looking to be in his late 50s at most, honing knives from behind the trunk of his car. His table, decked on the parking lot asphalt, had a pile of knives and an in-action sharpening stone. Orange sparks carelessly spraying everywhere . . . It was pretty cool.

After affixing my eyes on the pile of blades, I instantly thought of The Complete Manual of Things That Might Kill You (did you know that knives can be used for stabbing?) and didn’t plan to stay longer than a minute. But Gary’s personality was—dare I say it—sharp like a knife. Off the bat, he told me how he used to play “stick ball” in the streets of New York City. But his and his childhood friends’ games had to always be put on pause because the local “knife-sharpening guy would come and park nearby.” And I’m guess it was instant awe. So, for the last seven years, his childhood dream became a reality.

Now, you can find Gary bouncing from Angelenos’ farmer’s market to farmer’s market, and fabric stores in between. So, if you’re ever in Los Angeles and need your knives sharpened—this man has you covered!