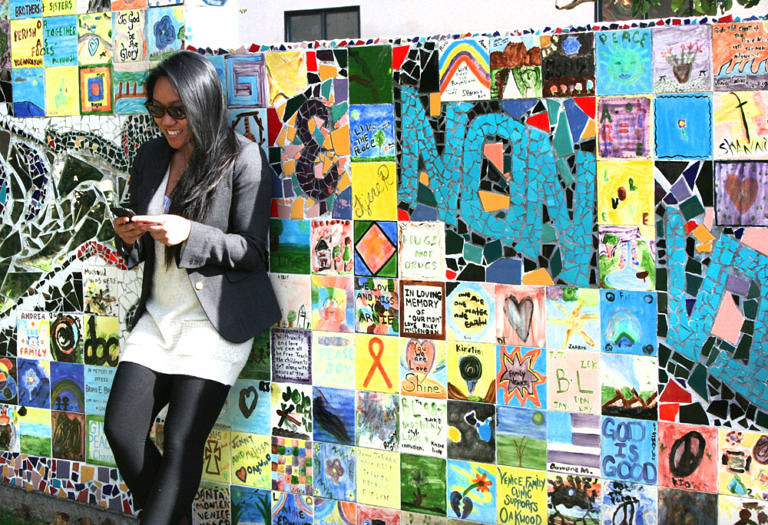 2. Originally from? Born in Florissant, Missouri, an outskirt of St. Louis. When I was seven years old, I moved to Orlando, Florida, where I usually tell people I’m from. And from then on, I kind of hopscotched across the U.S. (I went to college in Austin, Texas—Hook ‘em Horns!—and now live in Studio City.)

3. What the hell do you do all day? I do absolutely nothing. I make the rest of the people in the office believe I upkeep Facebook, Twitter, and the Knock Knock blog, when I actually pay a group of gifted fourth graders to write everything for me. So, I usually just spend the majority of the day banging on my keyboard with my earbuds in, looking legit. But—real talk—I actually do maintain Knock Knock’s social media realm, posting and replying to comments and questions. I also help coordinate PR and marketing efforts, which is all good fun.

4. Favorite thing about working at Knock Knock? Well, my favorite, favorite part is Knock Knock’s direct deposit. I also enjoy the outbursts of laughter coming from this way and that (which, case in point, stems from the hilarious people that run this place). And also all the free snacks (which is apparent from all the food pictures we have on FB).

5. Favorite hobbies outside work? I usually wind down with my keyboard and guitar. I love covering songs and writing my own when I’m feeling into it. Also, I’m not quite a foodie, but l love cooking and baking (I have a weird obsession with kitchenware). I’m also always down for playing tennis, killing zombies in House of the Dead 2 on the Wii, and any board game. And of course, I love reading and writing, and try to update my own blog and my Tumblr when I have the time. However, my new favorite hobby is finding a route to work that doesn’t take an hour and a half (curse you, 405)!

6. Did your professional life exist before Knock Knock? In a way, it did. I had the chance to intern at a few national publications (like Texas Monthly and Glo) during my college career. Otherwise, my paid professional life did not exist prior to. Unless, you count working as a retail person in Seuss Landing at Universal Studio Orlando’s Islands of Adventures, cashiering and making sandwiches at Quiznos (for Texas in-state residency), and blacking out social security numbers on admission applications for the University of Texas at Austin. Then yes, my professional life has existed for about six years now.

7. Favorite Knock Knock product? This is probably the hardest question on here. My favorites are Insults & Comebacks for All Occasions, Slang Flashcards, the Personal Library Kit, WTF Stamp, and the Oh-So-Handy Bookmark Pads. But seriously, everything is just so fun!

8. Pet peeves? The phrase “same difference,” doors that are slightly ajar, and when people call me Melissa (which is actually the name of one of my sisters, but usually people don’t know that). My newest pet peeve is when I’m driving on the road and the car in front of me is going about fifteen miles under the speed limit, but I’m stuck in that lane because cars are zooming on both sides of me. I just end up pumping up my music, and screaming in the car by myself.

9. Favorite TV show? I’m a huge Arrested Development fan (I tend to quote it on a daily basis) and a “frakking” Battlestar Galactica fanatic (just wrapped up the series a few days ago). My other all-time favorite shows are It’s Always Sunny in Philadelphia, Friends, Daria, Full House, Veronica Mars, and sadly enough, Degrassi. (It’s pretty embarrassing to admit, but I don’t care.) I also love Parks and Recreation, Summer Heights High, and anything on the Food Network.

10. What’s in your music rotation right now? Everything. I pretty much love all music, except for German scream-o. I usually go through random spurts throughout the week, where I’ll be hooked on a certain artist, song, or genre. Although I mainly use Spotify now when I listen to music, you can check out some of the old playlists I had on Grooveshark. But I’ve been listening to a lot of Johnny Cash, Fleet Foxes, old Busta Rhymes, Nat King Cole, and The Lonely Island (huge TLI fan!). And you can usually find me in my car jamming to Ben Folds, Meiko, Kate Nash, Franki Valli and the Four Seasons, and sometimes really terrible gangsta rap (no joke).

11. Most embarrassing moment? Since it’s the holiday season, I’ll give you a Christmas-themed one. I was in sixth or seventh grade and had to play the piano for this big, Filipino, holiday event back in Orlando (I’m Filipino, if you haven’t caught on). There were probably around a hundred or so plus people at said event. I was supposed to play just a simple Christmas carol to accompany the choir (and I practiced days and days in advance, as to not completely crap out). Anyways, it started out okay, but when the carolers started to sing, my nerves got the best of me. All of a sudden my fingers started to shake, I was playing the wrong keys, and was I totally thrown offbeat. We ended up having to start all over again. Yes, my cheeks were flushed.

12. What advice would you give your past self? Don’t let your emotions overpower your intelligence. (I did steal that from at T.I. song. Don’t judge.) There have been so many times when I’ve let myself slip away from level-headedness over things that are just plain frivolous. Also, I’d tell my second-grade self that on the first day of school, correct people when they call you Melody instead of Melanie, because they will continue to call you Melody for the next two weeks. Plus, it’ll help you overcome your shyness much faster.