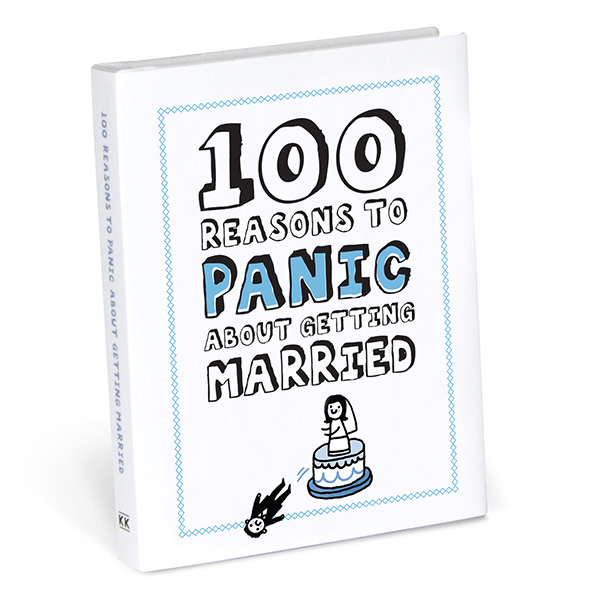 I have been a bridesmaid five times: Jennie (floor-length yellow satin), Amy (anything sleeveless in a color other than black), Leah (anything sleeveless, but only in black), Arielle (whatever I wanted, because my primary role was to help produce the wedding—in Spanish, in Spain), and Jamie (this one was both a friendship wild-card and fashion wild-card; I showed up in black patent-leather cowboy boots and a silk print dress to stand up for a relatively recent friend with whom I am no longer friends). I have seen many, many people panic about getting married. I myself have never panicked about getting married—like all good spinsters, I have instead panicked about not getting married, but fortunately I’ve grown out of that, along with recently transitioning out of spinsterhood.

I will tell you that the bride in the above list who panicked the most before getting married is the one whose marriage ended in divorce (though she’s now happily remarried), and the things she was terrified about immediately beforehand (to the point where she puked before walking down the aisle, already dolled up in her dress—talk about holding someone’s hair!) were, as she only narrated in retrospect, the exact things that brought down the marriage. She knew, but went through with it anyway, for a variety of reasons—one of which was plain old hope. You know, hope that he’ll change, that you’ll change, that things will get better rather than worse—false hope. Of the other brides, most are now past the ten-year mark with their marriages, with at least one kid, and they have helped to disabuse me of my tendency to idealize all things marriage-and-children. Apparently it gets less sexy and romantic over time, especially once the kids enter the scene. If the couple can make it to the empty-nest phase, however, marital happiness often returns (or so I’ve read).

We recently came out with two little books that I just love: 100 Things to Panic™ About Getting Married  and 100 Things to Panic™ About Having a Baby. As we descend into the June wedding season (right now we’re just in the pre-game), why not think about weddings and marriage and my inexplicable affection for the TV show Just Say Yes to the Dress? When Knock Knock had greeting cards (oh, how I do miss them, but what a not-so-profitable pain in the butt they were to create and distribute), we had a series called “Now that you’re . . .” that included “Now that you’re engaged . . .” and “Now that you’re married . . .” etc. We were going through our retired cards a while back and this series prompted the “100 Things to Panic About” concept. Because no one has enough to panic about already, right? I will admit, being the most cynical and dark sensibility in the group, that I thought the 100 reasons to panic was perfectly adequate without the slightest bit of leavening. You know, like matzoh. Fortunately, however, here at Knock Knock we are well balanced in complementary work and emotional habits, and the nice ladies in editorial determined just the right way to make this book and its 100 Reasons to Panic About Having a Baby sibling (and, one conjectures, future titles in the series) both funny and reassuring by undercutting each of the 100 fears with a dose of palliative reality.

I often say of myself that I am drawn to tipping sacred cows. If you tell me not to mention something, it’s all I want to blurt out. I know that I’m not alone in this, and as a matter of fact, this apple didn’t splat too far from my rotten family tree. My ninety-one-year-old paternal grandmother, a character and pistol if ever there was one, is childlike and compulsive in her need to reveal anything she’s been told to keep secret, in her increased desire to converse about topics that have been declared inappropriate for present company (favorite topic: other people’s weight gain), in her inability to refrain from repeating that which has already gotten her in trouble multiple times. At the very least, for the most part, I try publicly to be polite and considerate of individual people’s feelings. But cultural feelings? Fuck those. You want me to buy into the Judeo-Christian industrial complex? I’ve got a Jesus joke for you. Want to tell me about your belief in homeopathy? I wrote a section in The Complete Manual of Things That Might Kill You called “The World’s Most Expensive Pee” about vitamins and supplements and other stuff that somehow gets a pass from our otherwise solid belief in the scientific method. If you are overly earnest and dedicated to an indefensible idea or deluded fantasy (you know, like most religions), I am genetically inclined to mock you. I’m sorry—it’s really not personal, and if you’re going to believe deeply in something, like a faith, shouldn’t you be secure enough to withstand anybody else’s tirade rather than getting the panties in a bunch because of some political cartoon that didn’t treat your prophet with what you and you alone have deemed to be the proper degree of respect?

The truth is funny, and telling the truth is a stress release valve. We’re all scared. We’re scared of puberty and growing up and college and friendship and love and marriage and parenthood and poverty and injury and aging and death. (And of fat. We’re really scared of fat.) It’s the Western way to avoid that which scares us, which is in part what makes us overly earnest. So rather than taking offense when someone (possibly me—in this very post, no less) tips your Shroud of Turin, maybe think about how lightness of heart, even when applied to something you hold very, very dear, might be a good thing for the world.

One of the treatments for phobias is desensitization, something we outlined in The Complete Manual of Things That Might Kill You. The idea is that if you’re repeatedly exposed to that which terrifies you irrationally and you’re able to see that the outcome is just fine, you’ll be able to let go of your phobia. That, of course, is some of the impetus behind and draw around the 100 Reasons to Panic books. When you think about it, humor also often functions as a form of desensitization, allowing us to put out into the open and then laugh at the things that most disturb us, in the process melting away the fear and shame.

So if you’re planning a June wedding, go right ahead and get married, even though there are at least 100 reasons to panic about it. Do know that you’ll likely be dissatisfied in about ten years, but you can look forward to once again satisfied another ten years down the road, if the studies know what they’re talking about. Spend lots of money on your big party, wear a $2,000-and-up dress, and question what it’s all about. Then, right before you move to your waiting position at the altar or walk down the aisle, read 100 Reasons to Panic About Getting Married. Because, oddly, it’ll make you feel better.