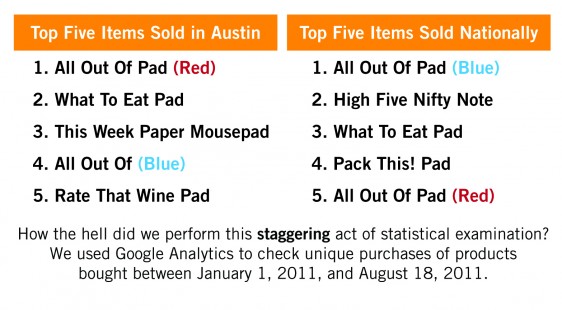 In our eyes, you are what you buy—judging solely on Knock Knock purchases, of course. In our “What Does Who Buy Where?” column, we determine the top five Knock Knock products in a selected city and compare them with the top five items in the United States overall.

The “Live Music Capital of the World’s” top purchases are almost in line with the rest of the nation’s. Almost.

For a city that coined the phrase Keep Austin Weird, their Knock Knock purchasing record doesn’t seem to be all that out of the ordinary. The only shocking find is that they’re purchasing the All Out Of Pad in red rather than blue, since Austin is known as one of the most politically liberal cities in the state.

It’s a no-brainer that the What To Eat Pad is second on Austin’s list (compared to the country’s High Five Nifty Note). What with their food trucks lining the streets, it’s safe to assume they have some hefty gastronomic culture under their Tejas belt buckles. Or maybe the University of Texas Longhorns need some help in scheduling their meals?

It’s notable that the Rate That Wine Pad came in fifth, as it’s not even in the nation’s top ten. We learned that there were some thirty-five wine bars scattered across Austin—sounds like a fun time! Perhaps people are taking the wine tasting into their homes and backyards (we’ve heard that Austinites throw great parties), the best use for the Rate That Wine Pad.

To top it off, there are plenty of movers and shakers in Austin, which may be why our This Week Paper Mousepad has been so popular with Longhorns. According to a 2009 CNN Money article, Austin was ranked as one of the top places in the nation to launch a small business. We’re going to assume that they scheduled their way to success—all thanks to us. (We aren’t actually assuming this, of course, but it would be nice to take the credit over here in California, wouldn’t it?)

Where are they buying all this great Knock Knock stuff? Could be at a Congress Avenue store called Monkey See, Monkey Do, one of our favorite Austin accounts!