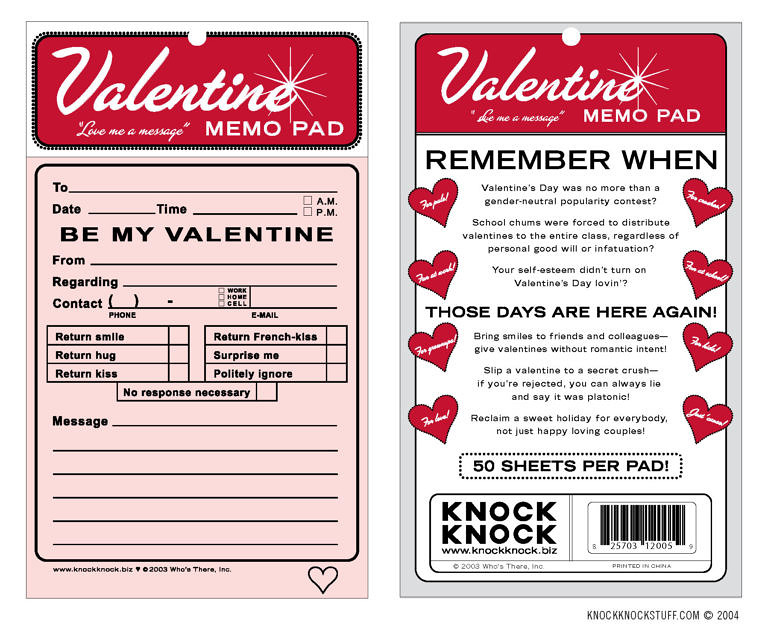 NOSTALGIA 2014: My still-sentimental self thought this 2004 pad could revive a time when every kid in the classroom got valentines. Then again, was that time actually so idyllic? Navigating classroom valentine dynamics was serious and humiliating stuff.

The best Valentine’s Day of my life was in high school, and I can’t say that many since have even come close. Kind of sad that the standout was twenty-five years ago. By contrast, I seem to have a great New Year’s Eve—the other over-promise-and-under-deliver holiday—about every five years, separated by ones that aren’t merely mediocre but instead pretty much suck.

That superlative February 14 took place during either my sophomore or junior year. My boyfriend, whom I was with for almost all four years of high school, not counting periodic tumultuous separations, sprinkled what must have been ten gallons of confetti over my bedroom—bed, desk, floor, window sills—then placed eight inflated balloons on my bed, each with one letter Sharpied onto them: I LOVE YOU. There may also have been rose petals. When I walked in on the surprise, I was beside myself with the romance of it all. My mother did not share my excitement, in part because she thought the relationship was too intense and too young, but specifically because the confetti turned out to be all but ineradicable. Looking back from my vantage point as a real adult with a real life to keep in order, I realize that the truly romantic gesture would have been for Erik to clean the installation up afterward. The confetti on the floor was probably a half-inch deep, requiring one vacuum cleaner bag after another. Years later, when the room was repainted, we found more confetti. I’m sure a few pieces remain laminated into the walls.

Valentine’s Day is a holiday of long standing mega-accelerated by industrial-era commercialism. In fact, if you’d like to know its history, have a look at our now retired greeting card “The Truth About Valentine’s Day,” included in the memory-lane series below. But even though it’s an occasion driven by commercial interests (you know, like weddings), we still yearn for these expressions of romantic love. We (mostly women) yearn for them year-round, but it’s only acceptable to yearn for them—and punish their absence—on February 14. And our poor partners (mostly men) know whatever they do will inevitably fall short and didn’t want to do anything in the first place anyway. And then there’s the single majority who have no one to disappoint us—which can be more disappointing than disappointment itself.

In Knock Knock’s early days, most greeting cards lacked sass and truth. We set out to fill this vacuum, and I’m proud to see kindred cards and messages all over the marketplace now. A primary objective for me then was to create cards that acknowledged the letdown that Valentine’s Day can be, as well as to provide missives that friends could give to one another without feeling like those well-meaning but pathetic Valentine’s Day cards your mom sends you because she feels bad that you’re single.

Knock Knock got out of most of the greeting card racket in 2007, and later we likewise took a break from doing holiday-specific gifts due to low demand. In the last few years, however, we’ve found that Valentine’s Day product is once again flying off the shelves (we’ve now got a whole section of it here). We are particularly proud of and grateful for our “What I Love About You” fill-in-the-blank journal (with an adorable video), a true bestseller that has not only flown off the shelves year-round but whose success has spawned “Why You’re So Awesome,” “What I Wish for You,” and “What I Love About Mom.”

This year I have a boyfriend for the first time in (okay, I’m embarrassed to admit this) nine years. Who happens to be the same boyfriend I had nine years ago. He did pretty well with a Valentine’s Day during Part 1 of our relationship (we refer to the two chunks as “Part 1” and “Part 2”) by baking a flourless chocolate cake and sprinkling an affectionate powdered-sugar message onto it. Like most straight men, however, tangible romantic gestures are not his forte. Still, after a nine-year drought, I will acknowledge that I’m hoping for something slightly north of mediocre, and if Adam wants to have a not-unhappy girlfriend in a couple weeks, he’ll make an effort to step up. Because we’re in our forties now, and guys in their forties should know that going through the Valentine’s Day motions is necessary for conflict avoidance. And that’s nothing if not romantic.