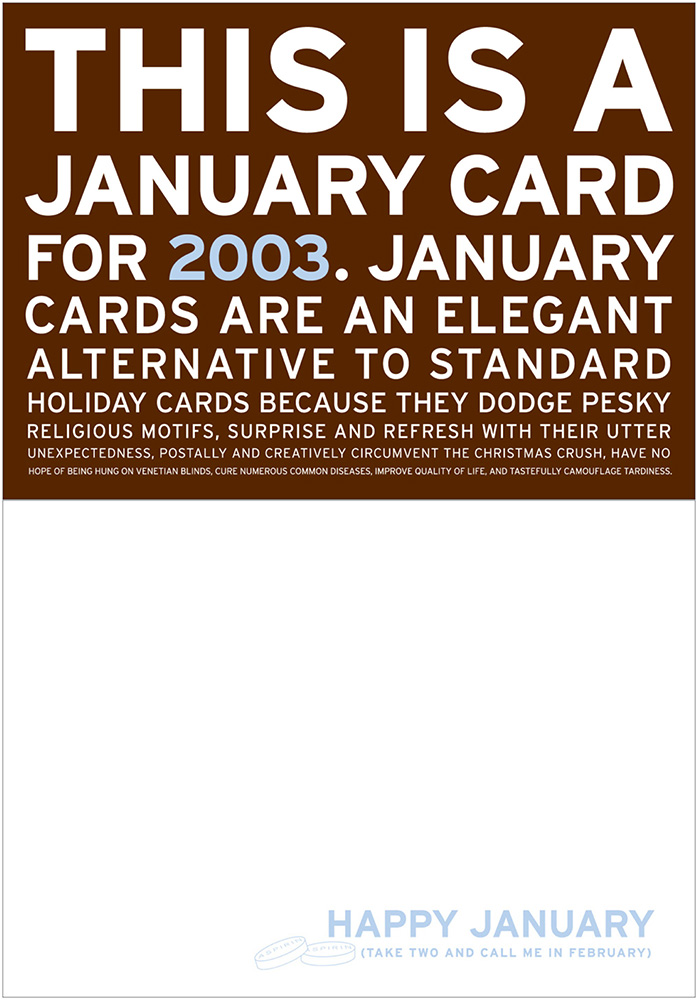 The January Card, inside and out.

I created two Knock Knock items long before I started Knock Knock: the January Card (later our top-selling holiday card) and the How to Find True Love Poster. I had both offset printed and mailed them to friends, family, and clients, and was delighted to get the response “You should sell that,” though starting a business seemed like the most unpalatable idea in the world. When eventually I got over that part of it, I knew both had to be part of our inaugural catalog (released in October 2002—just in time, I naively thought, for retailers to be buying for the holidays).

I created the pre–Knock Knock How to Find True Poster in 2000 in the wake of a breakup that left me mystified, perched at the everybody-else-seems-to-be-marriageable age of thirty. What else to do but make a flowchart?

I hadn’t yet learned Illustrator (I don’t think I even knew it existed), so I created the original poster in Quark, a fool’s OCD errand if ever there was. I was working on a not-very-big screen, so positioning the arrows required faith, direction, and a steady, non-point-dropping hand. Perfect to occupy the mind post-breakup. (N.B. My beloved childhood piano teacher called me upon receiving the poster and noted that there was one arrow that didn’t connect as it should.)

It probably wasn’t the best idea to send the poster both to my ex-boyfriend (I was the one who ended the relationship) and to the guy I had briefly, post-breakup, dated (I also ended that one; sadly, I did not have as much say in subsequent relationships). The ex-boyfriend was hurt but liked it, and I never heard from the fling guy again.

For Knock Knock, the poster’s font choices were more considered and we burst into the amazing new world of four-color printing. People immediately loved the poster, and it was a signature product of ours for a long time. We put it up on the side of our tradeshow booths and people would stop and read. Even after it had stopped selling in any reasonable quantity, we kept it in the catalog because people felt affection for it and associated it with classic Knock Knock.

It sold so-so—we went through a few print runs—but we learned there were problems selling posters through our existing channels of distribution, i.e., not poster stores. Retailers that don’t specialize in posters don’t have the wall space on which to display a poster, and posters (especially this one, with its fine print) don’t sell very well from tubes and labels alone. Live and learn.

We’ve long wanted to do something else with this material—it’s ripe for a digital interpretation, like a kind of Create Your Own Adventure click-through, or even a paper book. Or even a limited-edition online version. Do you think we should do something with it? If so, what?