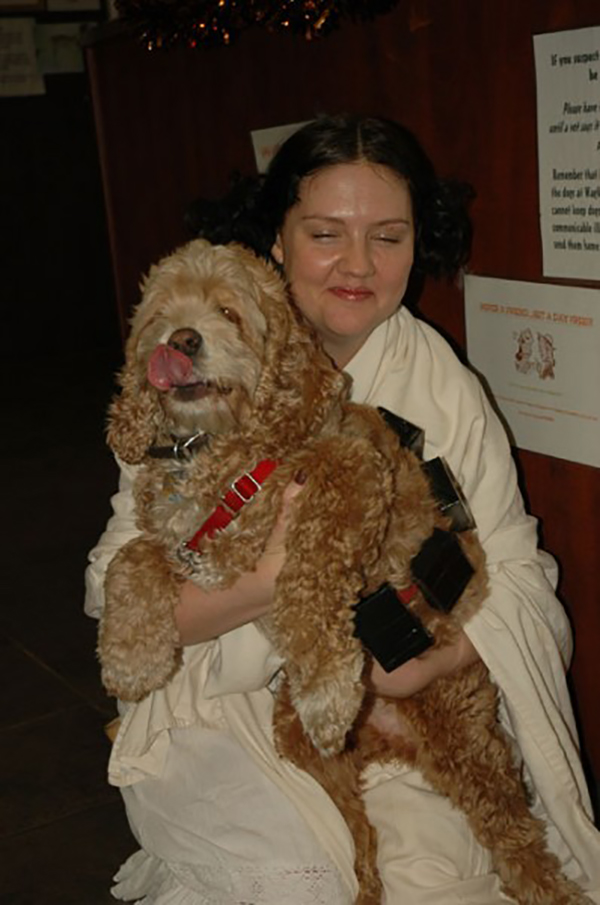 To get ourselves in the All Hallow’s Eve spirit, we’re sharing our favorite costumes that we’ve worn in the past.

On another note, we wish a belated happy birthday to Craig our creative director (it was yesterday)! Unfortunately, having your birthday so close to a holiday can ruin that celebration for you. Because Craig doesn’t like Halloween, he couldn’t share his favorite costume because it has never existed.

1.  “I made a Chewbacca costume for my dog, Toby, and dressed as Princess Leia. His ammo pack is made from cigarette boxes covered in duct tape. He also had a crossbow (not pictured). We won the costume contest at Wagville Doggie Day Care that year.” –Kate, assistant editor (pic above)

2.  “My favorite costume was a tooth fairy. As you can see in the photo, I was young. Things like the tooth fairy mattered at that time. Plus my mom made such an awesome toothbrush for me! I was a solid nerd and supporter of the fairies.” –Chelsea, manufacturing coordinator

3.  “My favorite was the homemade superhero costume that my mom made (she always made my costumes). I think I liked it best because no one else had my costume and it came with a crown and a wristband.

The witch is my second favorite only because the photo is with my dad—and no he’s not in costume (it’s just hunting season).” –Alexis, graphic designer

4. “In 1992 my company produced a movie called My Cousin Vinny. That Halloween my assistant dressed as Joe Pesci (Vinny) and I was Marisa Tomei (Mona Lisa Vito). Note my props, all from the movie. We were trying to reproduce the look from the poster.” –Jamie, writer/editor

5. “I’ve always made my own costumes, and when I was a kid, my mother made them. She was a quilter and taught sewing, so they were beautifully made. I grew up sewing, so I was able to continue the tradition for myself.

I made the shark my junior year of high school. I had gotten a concussion playing water polo (I was the goalie and blocked a goal with my head) and had to stay home from school for a week. To alleviate my boredom (there wasn’t as much TV then, after all), my mother brought home this shark pattern and all the materials. It didn’t take very long to make. My favorite part was the cone-shaped pillow that went inside the head of the shark, on top of my head.

I wore this again my freshman year of college. I met a really cute guy the night of Halloween and spent the evening talking to him, but he didn’t recognize me the next day because my shark costume hadn’t been very revealing—in any way.

I made the next costume, a cloud, for the Halloween of my senior college year. I sewed a simple shift out of muslin, spray-glued batting onto it, and then lightly spray-painted to tinge the edges in light blue. The lightning bolt on my head is foil-covered cardboard on a headband. I was surprised to get so many ‘What are you?’ questions—it seemed pretty obvious to me. A lot of people asked if I was Zeus, which I thought was the equivalent of hearing hoof beats and thinking ‘Zebras!’ Carmen Miranda is my best college friend, Jennie.

I have creative costumes from later years—an artichoke, a flower, a lackluster pumpkin (literally—I had a sign around my neck that said ‘Lackluster Pumpkin’), but I don’t currently have any of those pictures scanned. I’ve always done inanimate objects (though one year in my twenties I was a mouse) and think that ‘sexy’ anything is a cop-out (e.g., ‘sexy space alien,’ ‘sexy witch,’ ‘sexy punk rocker,’ etc.). Then again, Halloween hasn’t been a terribly successful dating holiday for me, so go figure.” –Jen, head honcho