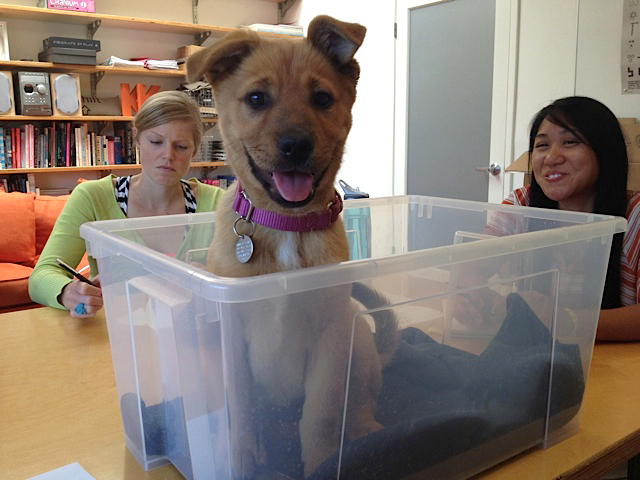 On May 28, I welcomed my first foster dog into my (and Paco’s) home. Charlotte is a sweet, well-tempered twelve-week-old shepherd mix (because all mutts up for adoption are either lab mixes, shepherd mixes, or pit mixes, sometimes with mention of chow thrown in for exoticism). She is very, very cute. Paco does not like her at all.

It’s been a long time since I had a puppy in the house—eleven years, to be precise, since I adopted Maisie from the South Central pound at eight weeks old. Paco came to me at five months old from a family that didn’t want to keep him. He was a puppy, yes, but for the most part he was already housetrained (except for a really unfortunate diarrhea-and-white-wall-to-wall-carpet incident).

It turns out that Charles Schulz wasn’t just being hyperbolic when he said that happiness is a warm puppy. Mammal babies are cute because they’re designed that way. Big eyes, cute little bodies, red lips, funny movements, playful temperaments—they wriggle and we bond. When Charlotte first arrived, I thought about how people want their dogs to stay puppies. Dog fostering, I determined, could be a way always to have a puppy! But I’d forgotten just how vigilant you have to be with a young canine—peeing, pooping, and chewing are unpredictable and of constant concern. I’ve told Take Me Home dog rescue that I may need to alternate placements with older dogs.

The thought of animals suffering, especially dogs languishing in small kennels or on the streets or abused, breaks my heart, yet to date I haven’t done very much to help. Determining how much of your life and income to give over to charitable causes is a hard call. Before I started Knock Knock, from high school forward I was much more involved in good causes. But the tsunami of the first six years of trial-by-fire Knock Knock meant there was barely room for sleeping, let alone contributing to society. For the last two or three years, I’ve been trying to exercise that muscle again, but it’s not always easy to be consistent or feel like you’re making a difference.

I also want Knock Knock to become more involved in charitable efforts as a company. We’d like to give our time, product, and money to a cause related to young people and writing (826 would be the obvious one, but it just seems exceedingly well supported already, and so “Look at me, I’m mucho cool” at that) as well as one related to animal welfare. (Over the writing stuff, I’d prefer to corporately support Planned Parenthood and reproductive rights issues, but apparently that’s a little more controversial, so I just support those in my personal life. Shit. Now I feel like Knock Knock’s a fraud for not taking a public stand in a much-needed arena.) It’s been harder than I’d thought to make it happen, though. We get busy and it gets deprioritized. We start to help one organization then learn they’re not actually doing great stuff. Or the group isn’t organized enough to manage our help well (this has happened to me as an individual multiple times—you show up to do stuff and they don’t have anything for you to do, etc.). Or it’s going to cost a buttload to ship giveaway product to a charity to which we agreed, in theory, to donate (paper is heavy, you know, because it used to be trees). It has been a source of surprise to me to recognize how hard it can be to productively and consistently contribute yourself and your resources to organizations and issues that deserve support!

I assume that most people live relatively selfish lives when it comes to the bigger issues, so consumed are they by earning a living and managing their households and families and going on Disney-themed cruises, etc. Perhaps I’m wrong, and I’m just projecting my own selfishness onto them (though I definitely have not yet had the misfortune of enjoying a Disney cruise). I myself have far more good intentions than actions. I’d like to not eat meat, for the aforementioned animal suffering reasons (though now I try mostly to eat meat that comes with a biography, i.e., “This grass-fed, free-range, non-antibiotic-or-grain-fed, gently butchered cow hails from the green hills of the Napa Valley and likes cribbage and long walks on the hillcrest”). I do lots and lots of shopping on Amazon because it’s so bloody convenient, even though they behave in the marketplace like monopolistic, price-setting, jump-you-in-the-alley thugs. I’d like to give away 10 percent of my income but probably max out at about 3 percent. I talk a lot of shit but don’t comprehensively stay up on the news (it’s depressing, after all, what with those narcissistic blowhard politicians going on and on about the size of their . . . budgets). I consume disposables and fuck up the earth. In my mind, there’s no question that I’m part of the problem, not the solution. And it’s not just personal: every time I go to the New York International Gift Fair I think to myself, “I can’t believe there’s this much schlock in the world.” We’re talking useless, unnecessary stuff, like ceramic swans and kosher fudge and gilded cake servers and pet Halloween costumes. And then I think, “I can’t believe Knock Knock is part of making more stuff.” It’s not like our goods are made out of clean air or rainbows or anything. Trees were killed.

Can you tell I’m unfortunate enough to be both self-critical and undisciplined? But despite my own self-loathing, make more stuff Knock Knock does, and the stuff we make, so people tell us, puts smiles on faces and makes for satisfyingly giftable moments. It also employs twenty-five-plus people (thirty by year’s end!), pays taxes, and allows us to contribute to good causes, if only in a small way so far. Not all of us can be Mother Teresa (and even she, apparently, went five decades without sensing God’s presence—not that I think I should be able to sense a divine presence, but Mother Teresa was all Christian and stuff). Much to my detriment, I tend to see things in an all-or-nothing fashion; if I’m part of the problem, then why should I even try to squeeze a drop of solution into an ocean of disaster?

But even if the only benefit is to make us feel smugly better about ourselves, doing good will become more and more of a focus both for me personally and for Knock Knock. At the very least, even if we keep reprioritizing and responding to the siren call of the money-making urgent, we still have time to be Geezers Doing Good. Provided, of course, we and the earth and those Disney-themed cruises last that long.